There are individuals, groups, organizations, peoples and social movements that defend human rights because they have their rights historically and systematically violated or because they face frequent violations as a result of this fight for the defense of rights. For the Brazilian Committee of Human Rights Defenders, these groups represent collectivities that resist and that need a close look of society and the State so that they continue to carry out their struggles with security.

From 1500s to the 1970s the Brazilian indigenous population declined sharply and many peoples became extinct. The disappearance of indigenous peoples came to be seen as a historical contingency, something to be regretted, but unavoidable. However, this picture began to show signs of change in the last decades of the last century. The current Brazilian indigenous population, according to preliminary results of the Demographic Census conducted by the IBGE in 2010, is 817,963 indigenous, of which 502,783 live in rural areas and 315,180 live in Brazilian urban areas. This Census revealed that in all States of the Federation, including the Federal District, there are indigenous populations. The Funai also registers 69 references of indians not yet contacted, besides there are groups that are demanding the recognition of their indigenous condition next to the federal indigenista organ.

In the count of the indigenous people themselves that population number is much superior, they count that today they are more than 1.000.000,00 (one million) of indigenous. Indigenous peoples in Brazil keep the cultural wealth of 305 people, speakers of 274 languages, guardians of forests and rivers, today they remain articulated and mobilized in defense of their lives and their rights, in favor of present and future generations.  These peoples did not give up their cultures, traditions, languages ​​and their lands, a fundamental condition for physical and cultural survival.

Indigenous peoples hold the original right over their lands. However, the right to remain in their territories is the greatest challenge of these populations, who face various attacks and violations from squatters, farmers, landowners, loggers and even non-indigenous populations living close to their territories. All of these groups have different interests in indigenous lands, and they carry out ways to use these spaces and to remove the Indians from their lands.

The Brazilian State systematically fails to defend the Indians and their territories and often acts as an agent violating these rights. Today there are several legislative proposals that violate the right of indigenous peoples, among them the most threatening is PEC 215 that aims to amend article 231 and 232 of the Federal Constitution of 1988. Several judicial decisions with misinterpretations such as the establishment of a Temporary Milestone to determine the traditional occupation of the indigenous territories. In addition to the rampant attacks of public power coming from the executive branch, which is not content to deny rights but also to withdraw them at all costs, for example the dismantling of the indigenous organization FUNAI, cuts in the public budget destined for indigenous politics, militarization in the indigenous communities, among many other violence that indigenous peoples suffer. 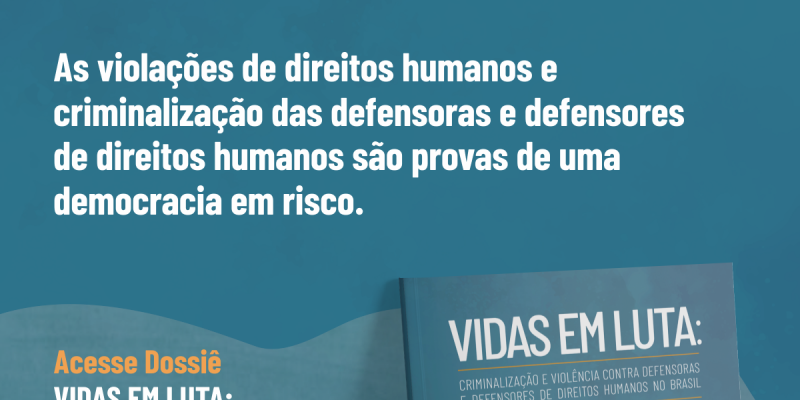 Dossier points out that human rights defenders in Brazil are at risk and are not adequately protected by the State
RECEBA INFORMAÇÕES
Cadastre-se para receber informações!